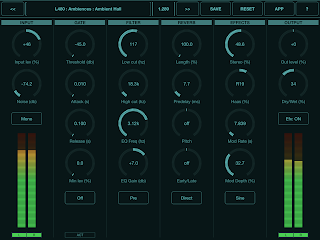 AltiSpace 2 is a convolution reverb app with advanced controls that provides realistic sounding natural acoustic space or vintage reverb devices for any track or mix.

But AltiSpace, in addition to the ability to load your own impulse response files and a built-in library of the most interesting vintage reverb device presets, has advanced settings such as EQ, gate, ducking, modulation and more. You can change the original impulse response parameters to something completely new and then save it as a new preset.

Any audio sample can be used as an impulse response, making AltiSpace also a great tool for creative sound design. Try to import a percussion hit sample and use it for a dry synth stab. You will immediately hear the difference.

AltiSpace is a universal application for iOS and macOS. It can work on iPhone and iPad as well as Mac / MacBook with M1 chip (and later). AltiSpace works on iPhone and iPad standalone, as an Audio Unit or Inter-App Audio module, and supports Audiobus and Ableton Link. On macOS, AltiSpace can works both as a standalone application and as an Audio unit (AUv3) with DAWs and audio unit hosts like Ableton Live, Logic Pro, GarageBand, MainStage, Cockos Reaper, Plogue Bidule, Hosting AU, and other hosts that support AUv3 plugins. All application features are available on iOS and macOS, including MIDI support (with a midi learn option) and audio unit parameters.

Convolution Reverb with Vintage Gear using AltiSpace 2 on iOS - How To App on iOS! - EP 406 S7