A notable update to the SpaceFields app is coming soon

This update will make it even more convenient to use the SpaceFields live. A new screen with the most important controls, a large area to start / stop the loop recorder and the big recording counter. The sampler can import up to 9 samples, which can be quickly loaded into the loop by tap on the sample cell. Smooth transition to the loaded sample (same as when recording the input signal). Option to save the recorded loop to the sampler and to an external file. 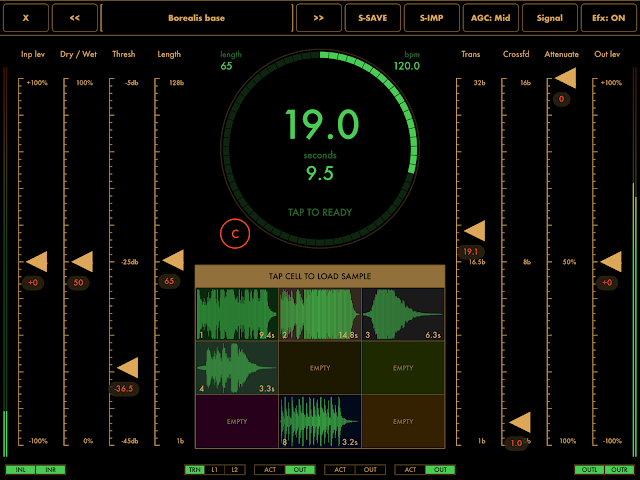 >>> Get SpaceFields app on the App Store


While this update is not ready, take a look at other creative apps for sound processing and experimentation.

AltiSpace 2 is a convolution reverb app with advanced controls that provides realistic sounding natural acoustic space or vintage reverb devices for any track or mix. >>> More about this app

SoundSaw is a complex sound processing app with easy-to-use controls designed to distort the sound of musical instruments or voice, and give the sound the aesthetics and atmosphere of noise, lo-fi, chiptune and experimental music scene. >>> More about this app

BeatCutter is an experimental multi-channel app for slicing and recombining sound based on rhythm. In the center of the app is a matrix of sample cells with smoothly reconfigurable recording, playback and control busses. This app is best for those who would like to experiment with large audio files or live instruments, creating chaotic constructions and patterns from sliced rhythm-driven samples. >>> More about this app

A complete sound effects processor and a mono to stereo converter with equalizer, effects and reverb, based on specially designed high-quality processing algorithms and suitable for any kind of audio sources. This app will add brightness and expand the sound space of any instrument from recorded musical instruments to software and even modular synthesizers. >>> More about this app

Synthesizer specially designed for creating and experiments with ambient soundscapes in wide range from noises to melodic instruments and everything in between. >>> More about this app

>>> An excellent series of tutorials for the SynthScaper app

The special lightweight version of SynthScaper LE lets you easily create and modify your own multi-timbral pads and atmospheric soundscapes. >>> More about this app

Advanced field recorder combined with a sound warp engine and a collection of ready to use dynamic presets for iPad and iPhone. Discover new ways to create and construct unusual and exciting sounds from any environmental audio recordings or samples recorded from other apps. >>> More about this app

SoundScaper is an experimental sound mini lab for creating unusual soundscapes, atmospheric textures, drones, glitches and noises based on circuit bending principles. >>> More about this app


Email ThisBlogThis!Share to TwitterShare to FacebookShare to Pinterest
No comments:

SpaceFields demo from How to App on iOS channel

In this episode of "The Daily Digest" on How to App on iOS I'm checking out every preset in SpaceFields by Igor Vasiliev.

SpaceFields is a loop based mangler effect for creating slowly changing rhythmic sound structures in a deep reverb space from an external signal. Great for experimenting and designing ambient and noise backgrounds with rhythmic elements. This app is Incredible!

In this episode of "How to App on iOS" I'll be kicking off a series making a NEW U-10 Cells EP titled "EADGBE" using SpaceFields app. I'll be creating 6 tracks using only 1 note per song E, A, D, G, B and E. This app is Incredible!

"SpaceFields by Igor Vasiliev (iMusicAlbum is his app store dev name) is - as usual from Igor - a trippy app that will appeal to those who like experimenting with sound. It is perfect for creating sounds of early electronic music such as that of Delia Derbyshire, Radiophonic Workshop etc, but the skies the limit really."

Know more and also more tricks mentioned in pinned comment of these demos!

This technical update fixes several issues. The next update will bring some significant additions.

Complete description is available as a PDF file.


Check out these detailed tutorials to learn more about this app. The next parts will be coming soon.

A fantastic new Space Ambient Machine from Igor Vasiliev. A truly amazing app, that allows you to create amazing and new ambient sound textures. This video is just an introduction and as some of Igor’s apps some controls will require some explanations that I will cover in the upcoming videos :).

This video covers the following:

I hope you enjoy and do not forget to subscribe. 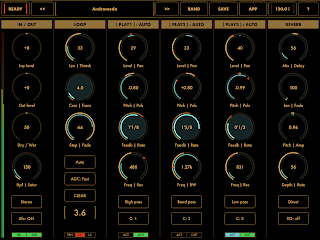 SpaceFields is a mangler effect for creating slowly changing rhythmic sound structures in a deep reverb space from any external signal. Great for experimenting and designing ambient and noise backgrounds with rhythmic elements.

The principle of the application is quite simple. It is based on a loop recorder with two loops. When one loop is recorded, the second is played back. When the loop recording stops, there is a smooth transition between them. Three separate outputs can playback the recorded loop with different pitches (speeds), each with its own effects and two automation generators. The mix of these outputs is fed to the convolution reverb. The reverb is packed with a set of long and deep sound spaces that create a blurry and ambient sound.

But the main feature of this application is its well designed parameters that make it easy to experiment with a huge number of sound options using any source material from live instruments to synthesized sound. With just two parameters you can add complex rhythmic structures based on Euclidean rhythms, and easy-to-use automation generators with a randomize option to add variations to the sound, allowing you to modify parameters like an LFO or based on a given rhythm. The convolution reverb has advanced options with which you can change and extend the original reverb spaces.

Even using the randomization button, in almost every case, you will get interesting and various soundscapes and textures. With this option it is very easy to create the basis of new, unique presets, requiring only slight tweaks to some parameters to get impressive results.

The loop recorder can be started and stopped manually or by input signal, can use fixed length or overwrite the loop while recording, and has the option for crossfade between the end and the beginning of the loop. All this makes it convenient for live use as well as when processing recorded material. As an extended option, you can use a special mode in which the application works as a direct effect, without the loop recorder.


SpaceFields is a universal application for iOS and macOS. It can work on iPhone and iPad as well as Mac / MacBook with M1 chip (and later). SpaceFields works on iPhone and iPad standalone, as an Audio Unit or Inter-App Audio module, and supports Audiobus and Ableton Link. On macOS, SpaceFields can works both as a standalone application and as an Audio unit (AUv3) with DAWs and audio unit hosts like Ableton Live, Logic Pro, GarageBand, MainStage, Plogue Bidule, and other hosts that support AUv3 plugins. All application features are available on iOS and macOS, including MIDI support (with a midi learn option), audio unit parameters and importing samples from any directory on device. SpaceFields has a built-in detailed description of all parameters.

SpaceFields - Pre-Release Demo for the iPad (The Sound Test Room)

Email ThisBlogThis!Share to TwitterShare to FacebookShare to Pinterest
11 comments:

Two very large and interesting archives of free samples that can be used for sound design and experimentation in apps like SoundScaper, FieldScaper, BeatCutter and even SynthScaper.

Freesound aims to create a huge collaborative database of audio snippets, samples, recordings, and all sorts of bleeps, ... released under Creative Commons licenses that allow their reuse. You need to register to download these samples.

Explore a weird and wonderful collection of noises from the broadcasting behemoth. There can be few organizations that have used more sound effects than the BBC, but did you know that that the good old British Broadcasting Corporation has made more than 33,000 of its FX available for free download?


How to download using the iPad Safari browser (step by step):

BeatCutter is an experimental multi-channel app for slicing and recombining sound based on rhythm. In the center of the app is a matrix of sample cells with smoothly reconfigurable recording, playback and control busses. This app is best for those who would like to experiment with long sound files or live instruments, creating chaotic constructions and patterns from sliced rhythm-driven samples.

>>> Get BeatCutter app on App Store

>>> BeatCutter - A series of step-by-step tutorials

Advanced field recorder combined with a sound warp engine and a collection of ready to use dynamic presets for iPad and iPhone. Discover new ways to create and construct unusual and exciting sounds from any environmental audio recordings or samples recorded from other apps through Inter-App audio or Audiobus.

>>> Get FieldScaper app on App Store