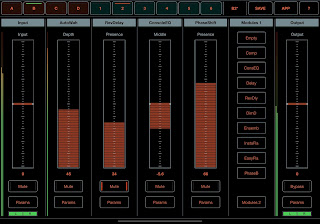 VintageRack is a minimalistic and convenient multi-effect application that contains modules realistically simulating notable retro gear from the early digital age with their natural lo-fi and warm aesthetics. Most of the effects in this application have been inspired and based on the principles of actual hardware from the 70s and 80s, which is great for giving the sound of any instrument the nostalgic and emotional mood of old recordings.

This application has a clean and intuitive user interface with a well-considered structure. All controls are located on the main screen, which is divided into seven slots for processing (effect) modules. The first slot contains the module for controlling the input, the last one is for controlling the output. Each of the five slots in between are designed to use one of the effect modules. The input signal passes from the first to the last slot and is then sent to the output.

Each slot has a Master Fader that controls the presence of the effect, and a Mute button that smoothly turns the effect on and off. These controls are available to be assigned to a MIDI controller, or to use as audio unit parameters regardless of the type of module in the slot. Also in each slot, there is a Parameters button that opens a panel of additional parameters for each module. Additional parameters of modules are kept to a minimum and represent the most suitable use cases.

The key idea behind application control is to first adjust the parameters of modules, and then use only the Master Fader to change the presence or depth of the effect and the Mute button to turn it on and off. Everything is geared towards fast and easy use.

Another great feature of VintageRack is the ability to set a lower bit depth of processed signal, typical for early digital devices, both for the entire path and for individual modules. As with these devices, this application simulates pre- and post-processing of the analog signal both before and after the digital circuits with the addition of companders, emphasis and filters, which makes the sound similar to the real devices. 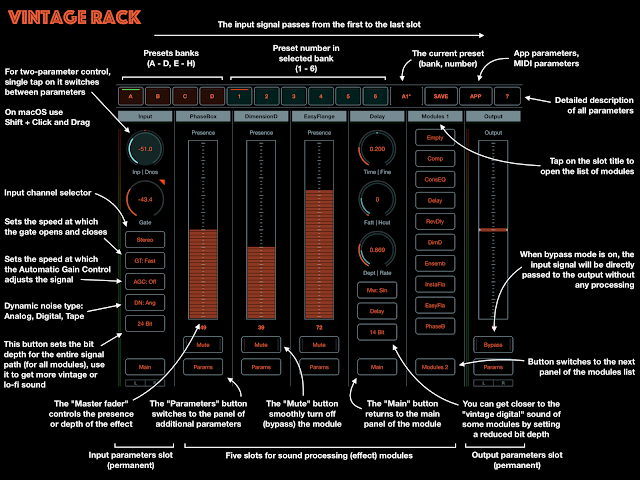 VintageRack is a universal application for iOS and macOS. It can work on iPhone and iPad as well as Mac / MacBook with M1 chip (and later). VintageRack works on iPhone and iPad standalone, as an Audio Unit or Inter-App Audio module, and supports Audiobus and Ableton Link. On MacOS, VintageRack can works both as a standalone application and as an Audio unit (AUv3) with DAWs and audio unit hosts like Ableton Live, Logic Pro, GarageBand, MainStage, Cockos Reaper, Plogue Bidule, Hosting AU, and other hosts that support AUv3 plugins. All application features are available on iOS and macOS, including MIDI support (with a MIDI learn option) and audio unit parameters. VintageRack has a built-in detailed description of all parameters also available as PDF file on the application site.

VintageRack - Walkthrough & Demo for the iPad (The Sound Test Room)