An experiment with abstract patterns generating by using only Korg Monotron as sound source and FieldScaper app on iPad for sound processing.


This composition was created from three layers recorded separately in real time. For each layer Korg Monotron was used for generating one sound, then FieldScaper app with different settings was used for processing source sound. First two layers were recorded on two track each (stereo) on Tascam Portastudio 424.

For these layers FieldScaper was set to the Loop mode for work as effect processor.

Third layer was recorded in real time at playback first two. Mixing made on Tascam Portastudio. Final record was made on Sony Walkman Professional WM-D6C.

Sounds were captured and output by external audio interface connected to iPad - Focusrite Scarlett 6i6.

Author description - "Quantum VJ is a glitch-style 8-bit pendant and audio visualizer. Any audio source can be connected to this device through the jack plug (3.5mm). It also can visualize some electromagnetic interference and the "soul modulations" of the owner when the audio ports are not connected. There are nine display modes that can be switched by the button."

Classic FX application will add brightness and expand the sound space of any instrument from recorded musical instruments to software and ... 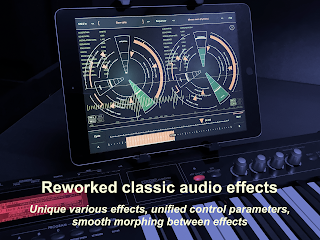