New samples for SynthScaper presets already recorded. It remains only to make presets with using these samples.

First presets pack will contains presets based on samples taken from modded Korg Poly-800 mkII. So called mods "FM800" and "Moog Slayer" were actively use when record the Poly-800 sounds.

Four notes (basically C3, C4, C5, C6) from different factory default presets of Korg Poly-800 were recorded on four tracks on Tascam Portastudio 424 mk III. Track by track. But it is not original sound of Poly-800. Mods were actively used to give more brightness, saturation and distortions.

All connections were made through the Allen & Heath GS3V mixing console. But when recording samples from the Poly-800 to cassette, no additional processing was used.

Next, these cassettes were digitized by using portable recorder Roland V-Studio 100. Final samples were with 44100 sample rate and 16 bit depth.

At the digitizing process was used Tascam 424 built-in equalizer to isolate range of tone on each track. The cassette was played at a slightly increased speed (to increase the pitch). As an insert effect after Tascam, was used the Eventide Harmonizer H949 in pitch correction mode to reduce the pitch to the original (more or less). With 12 bit AD/DA and early digital-analog hybrid processing in Eventide this gives a very interesting effect of saturation and tone drift.

To reduce the dynamic range before digitizing to 16 bit,  the DBX 166XS compressor was used and then a limiter in T.C. Electronic Finalizer 96K.

Each tone of each Poly-800 presets is recorded in a separate file. Finally, samples with loops for the SynthScaper app were made from these files in the Audacity app on Mac.


More about this project:


SynthScaper - Soundscapes synthesizer specially designed for creating and experiments with ambient soundscapes in wide range from noises to melodic instruments and everything in between.

Over 180 high-quality samples with sounds recorded from historic computing devices at The National Museum of Computing (TNMOC) at Bletchl... 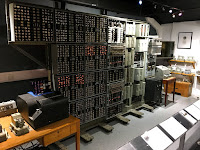